Over the past few months I have been troubleshooting a shul email problem, so if you’ve gotten a lot of “test” emails from me I apologize. Or maybe you didn’t get any! Gmail was blocking our email. They aren’t blocking us now, but check your spam folder. I am making progress, and I hope that most of our 150 subscribers receive email notification of new blog postings. While I was working on this email problem I had back-burnered a story about Dorothy and Alfred “Kurlie” Miller. Maybe now is a good time to share it. 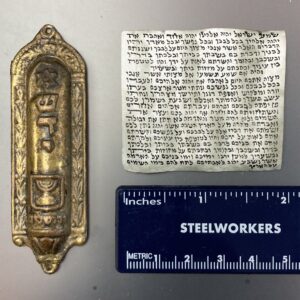 In a small town like Carnegie there are paths that cross, and we are treated to the occasional unexpected surprise. This is one of those surprises. My dear friend and fellow councilman Phil Boyd handed me an envelope one day and said, “here, this is for you”. Inside the envelope was a mezuzah. For our non-Jewish readers, a mezuzah is a small decorative container that is affixed to a doorpost in a Jewish home. Inside the case is a lambskin parchment with hand written paragraphs of Hebrew scripture. The writing of mezuzah scrolls is an amazing skill and the scribes go through rigorous training. The scroll at the right is only 2 inches wide. So, imagine writing these scrolls for a living. (you can click on any of these photos to see more detail) I asked Phil where he got this artifact. He said he found it in a box of things that he brought over from his old house. Phil and his wife Cheryl had recently sold their home on Center Ave after having lived there for almost 35 years. As it turns out, they bought the house from Dorothy Miller in 1987. Phil had grown up next door to Kurlie and Dorothy Miller and from his youth was very fond of Kurlie. When Dorothy decided to sell the house, Phil bought it.  It is customary to take your mezuzahs with you when you move, unless a Jewish family is moving in behind you. Dorothy took all her mezuzahs, but one got left behind on a basement doorframe.

Kurlie and Dorothy were part of the large Miller family in Carnegie, which included Izzy and Morry of Izzy Miller Furniture fame. Phil credits Kurlie for teaching him how to do math. Kurlie would take the young Phil to the grocery store and they would have a contest. They had to keep track of the total cost of all the goods in the shopping cart, subtracting the value of coupons. And they did this in their heads! When they got to the cashier they would see who was correct. More often than not they would catch an error that the cashier made. I could tell how much the story meant to Phil because he had a smile that covered his whole face while he was telling me. 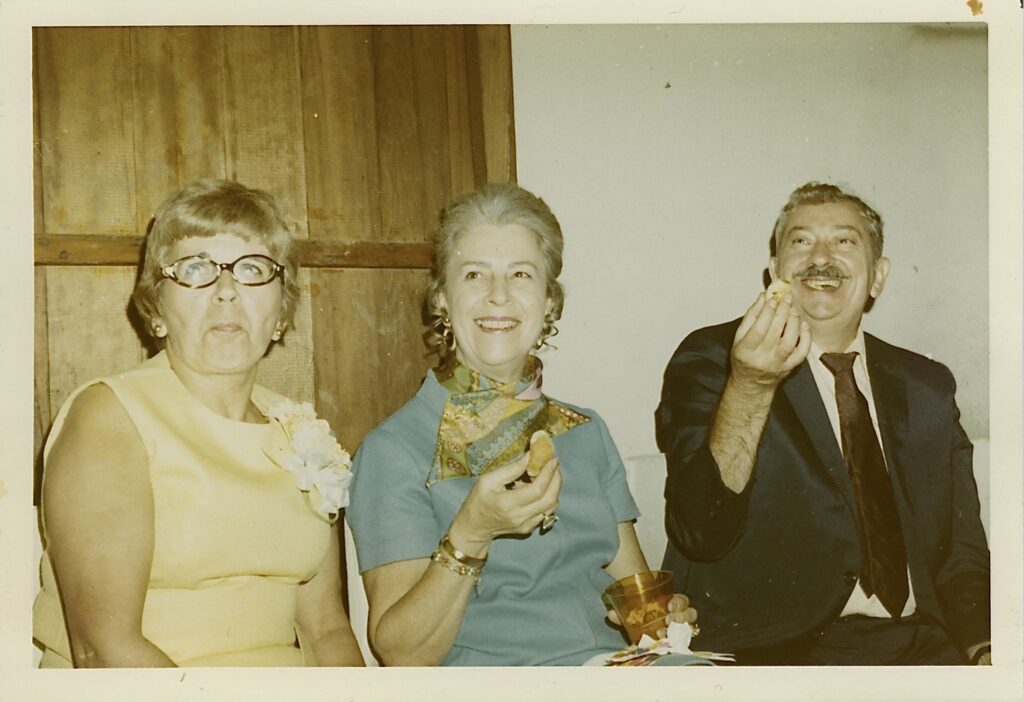 I never had an opportunity to meet the Millers. Kurlie passed away in 1982 and Dorothy retired out of state after she sold the house in ’87. Here’s a picture of Dorothy, Phil’s Aunt Margaret, and Kurlie. I don’t know where this photo was taken, but it kinda looks like the shul social hall back in the ’70s. 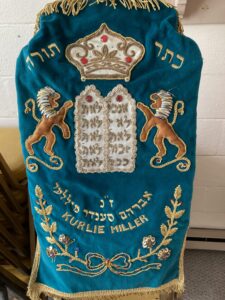 At shul we have some Torah covers that were donated to the shul in Kurlie’s memory. Here is one of them. Above his embroidered English name is his Hebrew name, Abraham Sender Miller. The Yiddish name Sender has a great history and includes the similar names Sander, Sanford, etc. Well known are Michigan Congressman Sander Levin and baseball great Sanford “Sandy” Koufax. These names are derived from the name Alexander, which can be split phoenetically in two: Alek Sander. Jews named their sons Alexander, Sender, or Sander in tribute to Alexander the Great, who treated the Jews in his empire justly and preserved the Temple in Jerusalem when he conquered the Middle East. Two of our shul’s Alexes include Dr. Alexander “Alex” Sax, son of Ike Sax of blessed memory, and Aleksandr Shenderovich, father of the twins.

So, back to the beginning of the story. The mezuzah is not in very good shape.  The case could be cleaned up, but the parchment is in poor condition. The case is not waterproof and the parchment has some water damage. It’s probably not kosher. I don’t know if buying a new parchment is an option because it is unusually small. And without a parchment, the case is just a decoration. I suggest that it would make a nice keepsake if someone in the Miller family wants to claim it. Just drop me a line. It’s sitting on my office desk.

Feel free to share some memories of Dorothy and Kurlie, and did I forget any Sandies?

Be well everyone. Rick