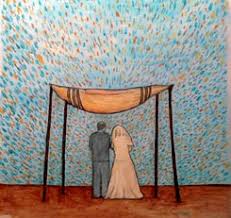 If ever there was a controversial parshah for me, this is the one.

Let me begin by reminding you that in our tradition it is sometimes okay to argue and disagree with God.  Abraham argues with God about the destruction of Sodom and Gomorrah.  Moses argues with God athat he should not be the one to demand that Pharoah let God’s people go, Jonah argues about the destruction of Nineveh, and so it goes.  And so today I will argue a little about Parshah Emor.  Why?  Because this is the parshah that includes the instruction that Cohains are not permitted to marry divorcees, and I am a Cohain who did just that.

In the Five Books of Moses published by the Hebrew Publishing Company that I grew up with, Chapter XXI, Verse 7 of Emor says, “A woman that is a harlot, or one profaned, shall they not take; and a woman put away from her husband shall they not take; for holy is he unto his God.”  (They, in this instance, refers to the Cohanim.)

In our own Hertz chumash, the translation of this verse is, “They shall not take a woman that is a harlot, or profaned; neither shall they take one who is put away from her husband; for he is holy unto God.”  And the comments elaborate, “put away. Better divorced.”

So, if I read this correctly, according to the Torah divorced women are taboo to Cohains in the same way as harlots.  And they are less than pure, thus denied to Cohains, if they have been put away from their husbands.  Okay, maybe this makes sense if the divorced woman did something wrong causing her to be put away.  But what if the husband from who she is divorced was an adulterer, or beat her, or refused to support her, or committed some of the abominations that we read about last week?  Should the woman be forced to suffer with such a man forever?  Should the Cohain be denied the opportunity to find happiness and love with her, especially today when the Cohains are unable to perform their obligations in the temple?

My father was not a wealthy man.  There was no financial inheritance to me from my father.  What my father did leave me was my birthright as a Cohain.  What does that mean to me in today’s world?  At most shuls the Cohains no longer give the priestly blessing on the holidays, but do receive the first aliyah on Shabbos.    Not a huge thing I will grant you, but something that was passed along to me by my dad and something I have always been proud of.

The Orthodox will tell you that my marriage to a divorcee is legal, but that I no longer have the rights of a Cohain.  In fact, a few of my wife’s Orthodox friends have pretty much shunned her for marrying me.

The Conservative movement however has taken a different position on this issue in recent years.  According to the Schechter Institute of Jewish Studies, “In 1952, the Committee on Jewish Law and Standards of the Conservative Movement approved such marriages in our days, in which divorce is not seen as an “unseemly thing” (see Deuteronomy 24:1), since most marriages end due to incompatibility. Rabbi Bokser’s responsum (published in Proceedings of the Rabbinical Assembly, 1954, pages 55-58 and reprinted in Golinkin, ed. Proceedings of the Committee on Jewish Law and Standards of the Conservative Movement 1927-1970, Vol. 3, pages 1459-1462) points out that such marriages are recognized once entered upon, even according to Talmudic law. The children of such a union are legitimate. Therefore he concluded that a Cohen should relinquish his status as a Cohen and the couple should refrain from a large wedding in such cases, but a Conservative rabbi could perform such a wedding.

In 1996 Rabbi Arnold Goodman reconsidered the responsum. He wanted to deal specifically with the problem of the Biblical prohibition. He refers to the authority the rabbis have to uproot a Biblical prohibition, in this case as a hora’at sha’ah, the demands of the moment. We are in a time of crisis due to intermarriage and the high divorce rate. It is highly probable that a Cohen seeking to marry will meet a divorcee. His conclusion is that a Conservative rabbi may perform such a wedding, the Cohen does not have to relinquish his status as Cohen and the wedding may be celebrated publicly (no need for a small wedding). He leaves the possibility open that a future Law Committee may decide to reverse this decision should intermarriage rates become much lower.”

Despite this ruling, however, some Conservative rabbis, as a matter of personal conscience, still refuse to perform these marriages or allow the Cohain to retain his aliyah or give the priestly blessings.

It is hard for me to argue with these rabbis if they in all good conscience cannot perform such a wedding.  Arguing with God is even more difficult.  He is our creator and he has given us the laws that are intended to make us a holy and moral people.  But to deny happiness to a man and a woman because the woman was involved in an unhappy marriage just does not seem right.

I hope that God will accept my disagreement with Him as he did the disagreements of our forefathers.

I am happier right now than I have ever been in my entire life and the main reason is because I am married to a wonderful woman who has taught me so much about our Jewish tradition, who has introduced me to Jewish learning and to a Kosher home, and who has brought me so much closer to God.

I hope and pray that God understands.