This week’s candle lighting time is 5:36.

O.K., I must admit that the Book of Exodus became my favorite book of the Torah after seeing the Cecil B. DeMille classic, The Ten 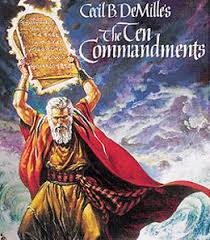 Commandments, and that I am often surprised when I find that the Torah and the movie don’t always tell the story in exactly the same way.

And so, after Moses received the Ten Commandments in Parshah Yitro two weeks ago, I felt certain that we would be reading of the golden calf last week, because in the movie Moses comes down from Sinai with the Commandments, sees the people dancing around the golden calf, throws the Commandments to the ground, and watches as the earth opens and swallows up the sinners.

But no, last week’s parshah, Mishpatim, tells of Moses ascending Mt. Sinai for 40 days and 40 nights to receive the Torah from God, and of the 23 positive commandments and 30 negative commandments including, “you shall not cook a kid in its mothers milk”, and, “an eye for an eye, a tooth for a tooth, a hand for a hand, a foot for a foot.” 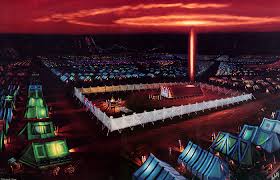 Well, not necessarily.  Let me share with you the explanation I found on the Chabad web site.  It is quite lengthy, but I assure you it is well worth taking the five minutes or so that it will take to read:

“Following the Torah’s account of the revelation at Mount Sinai and Moses’ ascent to the top of the mountain to receive the Torah from G-d, come 16 chapters — comprising the Torah sections of Terumah, Tetzaveh, Ki-Tisa, Vayak’hel and Pekudei – -in which are related:

a) G-d’s instructions regarding the building of the Sanctuary (Exodus 25-31, covering the sections of Terumah, Tetzaveh, and the first part of Ki-Tisa);

b) The sin of the Golden Calf and the granting of the Second Tablets (Exodus 32-34, all in Ki-Tisa);

c) The people’s donation of the materials for the Sanctuary (Exodus 35) and the Sanctuary’s construction, erection and sanctification (Exodus 36-40; these comprise the sections of Vayak’hel and Pekudei).

In keeping with the rule that “There is no earlier and later in Torah” (i.e., the Torah does not necessarily relate events in the order in which they occurred), the biblical commentaries differ as to the chronology of these events. All told, there are no fewer than three different versions of the time-frame of the Mishkan’s making vis-a-vis the making of the Golden Calf.

The following timeline, spanning a period of almost ten months, is agreed to by all:

1) On Sivan 6 (or 7, according to Rabbi Yossi), G-d revealed Himself to all of Israel and proclaimed the Ten Commandments; on the following day, Moses ascended Mount Sinai to receive the Torah from G-d.

2) Forty days later, on Tammuz 16, the people made the Golden Calf, and rose early the next morning to worship it. On Tammuz 17 Moses descended from the mountain carrying the Tablets of the Testimony; upon seeing the people dancing around their idol, he smashes the Tablets at the foot of the mountain.

3) On Tammuz 19, Moses ascended Mount Sinai for a second 40 days to plead for forgiveness on Israel’s behalf. At the end of this period, G-d tells him to carve two new tablets, upon which He will inscribe the Ten Commandments, to replace the broken tablets.

4) On the 1st of Elul, Moses ascended the mountain with the tablets he carved for a third forty days, which concluded on the 10th of Tishei (Yom Kippur). On that day, Moses received the Second Tablet from G-d and G-d expressed His full forgiveness of Israel’s sin.

5) The construction of the Mishkan’s components and vessels was completed 2 1/2 months later, on the 25th of Kislev (the first day of Chanukah). But the Mishkan was not set up until more than three months after that, on the 1st of Nissan (preceded by a week of “initiation,” Adar 23-29).

The above is derived by the Talmud from the Torah’s account. The point of contention between the commentaries concerns G-d’s instructions regarding the Mishkan and the people’s donation of its materials.

Nachmanides is of the opinion that these occurred in the order in which they appear in the Torah. Thus, G-d’s instructions to Moses regarding the Sanctuary (recounted in Terumah and Tetzaveh) came immediately after the revelation at Sinai, during Moses’ first 40 days on the mountain. Their implementation, however, was delayed by Israel’s sin and the need for Moses to obtain G-d’s forgiveness and a second pair of Tablets, so that the donation of the materials described in the beginning of Vayak’hel (Exodus 35) occurred on Tishrei 11, the day after Yom Kippur, followed by the Mishkan’s construction and erection as per above.

Rashi (who follows the Midrash Tanchuma), notes the many Scriptural and Talmudic indications that the Sanctuary was in response to, and an atonement for, the sin of the Golden Calf. Accordingly, Rashi is of the opinion that the divine instructions contained in the sections of Terumah and Tetzaveh were communicated to Moses on Yom Kippur, following Israel’s repentance, G-d’s (full) forgiveness, and Moses’ receiving of the Second Tablets.

A third opinion is that of the Zohar, which states that both G-d’s instructions and Israel’s donation of the materials occurred before the sin of the Golden Calf. (Thus, explains the Zohar, the people had to “unload the golden earrings which were in their ears” to provide gold for their idol, since their gold had already been donated for the making of the Mishkan.) According to this, the making of the Sanctuary was not a result of Israel’s sin and their repentance thereof, but a mitzvah that was commanded, and begun to be implemented, before the incident of the Golden calf.”

And so there is no need to doubt Mr. DeMille afterall.  Or is there?

So we didn’t quite go over the fiscal cliff, but are we home free yet?  The Jewish Federation of Greater Pittsburgh’s Community Relations Council is sponsoring what promises to be a very interesting program, The Other Side of the Fiscal Cliff,  on February 27.

The Other Side
of the Cliff
The fiscal cliff was narrowly averted, but the need to balance the budget remains. And Government spending cuts for social service agencies still loom.

Join us for a briefing to learn about the issues and what the resolution could mean for you, your family and our entire community.