We will be streaming our High Holiday services via You Tube.  To view the services use this link:  https://youtu.be/uefmVrFn-Cg

It will go live just before services on Friday evening.
Our goal is to adhere to tradition as much as possible during the pandemic, including minimizing the use of electronic equipment during services. As such, we will “go live” with this link before Erev Roshanah and it will run continuously through both days of Rosh Hashanah. It will be running on automatic the entire time and no one in the congregation will be operating the equipment during services. During a 50-hours long continuous video stream, disruptions could occur due to electrical power interruption, internet disruption, or software hiccups, and the stream would stop. Depending on the severity and duration of the disruption, the streaming may restart automatically or it may not restart at all. No one will attend to such problems during services. After services we can attend to any streaming problems. Be advised that if the streaming needs to be restarted from scratch, we may have to email you a fresh link.
If you need a High Holiday prayer book to follow along with the service, you may borrow one from the Shul.  Please email Mike Roteman at mrmike7777@yahoo.com if you need a book.  He will be at the Shul at 10 am tomorrow to provide you with the prayer book and a Yizkor book.  Yizkor prayers are also included here.
Who Says Yizkor
It is customary for those with both parents alive to leave the synagogue during the Yizkor service. A mourner during the first year remains in the synagogue, but does not recite the Yizkor. Some kindle a 24-hour Yizkor candle (before the holiday).
In addition to reciting Yizkor for one’s parents, one may recite Yizkor for any Jew who has passed on, including relatives and friends. When reciting Yizkor for more than one person, repeat the Yizkor paragraph each time, and substitute the words “Aböh Mori” (my father), or ” Imi Morösi” (my mother), with the appropriate title, as follows: For a Husband: “Ba-ali.” Son: “B’ni.” Brother: “Öchi .” Uncle: “Dodi.” Grandfather: “Z’kainy” . Wife: ” Ishti.” Daughter: “Biti.” Sister: “Achosi.” Aunt: “Dodosi.” Grandmother: “Z’ken-ti.”

For a father (and all males) say:
Hebrew and Transliteration:

May G?d remember the soul of my father, my teacher (mention his Hebrew name and that of his mother) who has gone to his [supernal] world, because I will — without obligating myself with a vow — donate charity for his sake. In this merit, may his soul be bound up in the bond of life with the souls of Abraham, Isaac and Jacob, Sarah, Rebecca, Rachel and Leah, and with the other righteous men and women who are in Gan Eden; and let us say, Amen.

For a mother (and all females) say:
Hebrew and Transliteration: 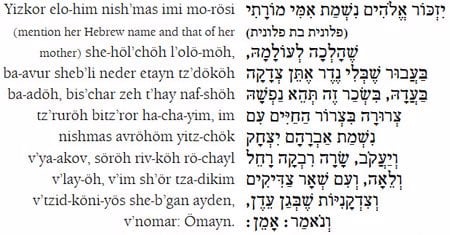 May G?d remember the soul of my mother, my teacher (mention her Hebrew name and that of her mother) who has gone to her [supernal] world, because I will – without obligating myself with a vow – donate charity for her sake. In this merit, may her soul be bound up in the bond of life with the souls of Abraham, Isaac and Jacob, Sarah, Rebecca, Rachel and Leah, and with the other righteous men and women who are in Gan Eden; and let us say, Amen.

May the All-Merciful Father Who dwells in the supernal heights, in His profound compassion, remember with mercy the pious, the upright and the perfect ones, the holy communities who gave their lives for the sanctification of the Divine Name.They were beloved and pleasant in their lives, and [even] in their death were not parted [from Him]; they were swifter than eagles, stronger than lions to carry out the will of their Maker and the desire of their Creator.May our G?d remember them with favor together with the other righteous of the world, and avenge the spilled blood of His servants, as it is written in the Torah of Moses, the man of G?d: O nations, sing the praises of His people, for He will avenge the blood of His servants, bring retribution upon His foes, and placate His land — His people.And by Your servants the Prophets it is written as follows: I will cleanse [the nations of their wrongdoings,] but for the [shedding of Jewish] blood I will not cleanse them; the Lord dwells in Zion.And in the Holy Writings it is said: Why should the nations say, “Where is their G?d?” Let there be known among the nations, before our eyes, the retribution of the spilled blood of Your servants. And it is said: For the Avenger of bloodshed is mindful of them; He does not forget the cry of the downtrodden. Further it is said: He will render judgment upon the nations, and they will be filled with corpses; He will crush heads over a vast area. He will drink from the stream on the way; therefore [Israel] will hold its head high.