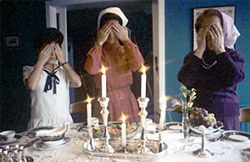 Who Would You Choose?

It is a great conversation starter and a question that I have been asked and that I have asked on numerous occasions – If you could pick any three current people or people from history to have dinner and conversation with, who would they be?

Over the years my answer to this question has varied greatly.  At one time I might have, as many people do, picked a great athlete or entertainer, but not today.  Sure athletes and entertainers are talented people who are often idolized and held up as role models, but should they be?  Alas, they are people just like you and me with the same human failings as anyone else.  There are just way too many examples of fallen idols among these folks.  Far too many athletes like Barry Bonds or Alex Rodriguez, and performers like Charlie Sheen and Justin Bieber who have proven to be exactly the opposite of what we want our kids to grow up to be, and yet the celebrity tv shows and magazines continue to flourish.  And some of us still buy products because these people tell us to, or vote for someone because a George Clooney  or Martin Sheen says we should.  I mean,  really, Martin Sheen was a great president on The West Wing, but that was fiction folks, fiction.

I have often thought that Dr. Jonas Salk would be on my list, but as much as I admire him for helping to rid us of that terrible scourge, polio, he just doesn’t quite make the cut.

Nor do guys like John Glenn, Alan Shepard, or Neil Armstrong.  Courageous, trailblazing astronauts, but not quite up there with my current picks either, I’m afraid.

I do not want to get to know evil people like Hitler, Stalin, or Attila the Hun either.  I have no desire whatsoever to dine or chat with the likes of these.

So who are my current choices?  Well, I couldn’t cut the list to only 3, so here are my top 5 choices.  Most are religious figures, thought they are not all Jewish.

Number one is to me the greatest human that ever walked the face of the earth – Moses.  No need to recount this guy’s accomplishments, they are far too numerous to begin to enumerate in this small space.

Number two is Jesus.   No, I don’t consider him to be the messiah, nor is he a hero of mine, but I would like to know what he thinks about his fame.

Similarly, number 3 is Mohammed.  Tell me Mo, what do you think about all of the terror attacks and killing that the Muslim world attributes to your prophesies.

Number 4 is one of my ultimate heroes and he is as Jewish as anyone can be.  You read about him during the Yom Kippur services when we read about the ten martyrs, and any of these ten would be people who I would love to talk to, but my selection is Rabbi Akiva,  who was raked over his skin with iron combs. Despite the pain that was consuming him, Akiva died while reciting the Shema, drawing out the final Echad – “One”, in praise of our Creator and in defiance of his murderers.

And finally, at number 5, or possibly even number 1, is my mom.  She was only 47 when she died and I would love to have a chance to talk to her now as an adult and let her know how much she shaped my life, and how much I loved her.